As part of its drive to reach out to cargo-originating regions to garner sustained support, Chennai Port has organised “Trade Facilitation Meet” in Hyderabad recently. 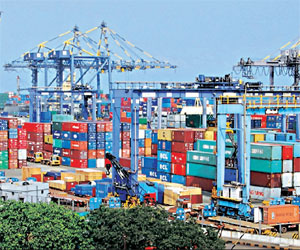 Organised in association with the Federation of Andhra Pradesh Chamber of Commerce and Industries (FAPCCI), Chennai Port used the forum to showcase the facilities and advantages of the Eastern gateway port that has regular mainline vessel connectivity to various ports across the globe.

Officials of the port management made an elaborate presentation about the port, its facilities to the regional EXIM players and underlined that after stoppage of coal/ iron ore handling, the Chennai Port has vast open area of 11, 46, 160 sq. mtrs and covered area of 28,768 sq. mtrs available for other cargoes.

It may be worth recalled here that the port continues to be the second largest container port among the Major Ports after JNPT and had handled the highest volume of 1539279 TEUs during 2012-13.

Besides, the port has better connectivity of Ro-Ro vessels operated regularly by the leading shipping lines viz. NYK, WWL, GLOVIS, EUKOR and HOEGH with the trade route destined to Africa, South America and Far East countries.

Briefing about the EXIM players in Hyderabad to utilise all the facilities at the Chennai Port, a senior ChPt official said the port has taken pro-active action to improve the productivity and attract cargo by offering concession in charges. “The port provides concession on vessel related charges (VRC) for mainline container vessels to the extent of 20% to 55% since January this year.”

“Also, introduced half shift gang from April which enables to commence cargo operations immediately after berthing of the vessels and the slab period for penal demurrage is increased from 17 to 30 days for import cargo and 30 to 40 days for export cargo.  Direct delivery of cargo and using private crane is also allowed without any restrictions,” the official explained.

In order to improve the productivity, the Chennai Port has also invited RFQ for the supply, operation and maintenance of four Harbour Mobile Cranes with the capacity of 100 tonnes each. Those cranes are expected to be pressed into operation by the end of July 2014.

As a next leg of such outdoor trade meet, the port management is likely to organise an event at Tirupur in the coming weeks.

Posted on September 26, 2013, in Uncategorized. Bookmark the permalink. Leave a comment.